Restoration plans for the Common

At the  AGM of the Friends of Meadowridge Common on 24 February 2020, Dr Charmaine Oxtoby gave a talk on the proposed ecological burn on Meadowridge Common, an exciting plan to restore the critically endangered Cape Flats Sand Fynbos that is fast dying out on the Common. This is a co-operative venture involving The Friends of Meadowridge Common (represented by the Chairman Roger Graham and Botanical Officer Fiona Watson), the City of Cape Town Recreation & Parks Department (Sihle Jonas, Luyanda Mjuleni and Fay Howa),  the City of Cape Town Biodiversity Management Branch (Charmaine Oxtoby and her team), SANBI’s  Millennium Seed Bank  and the City Fire and Rescue Services.

Why does the Common need a fire?
There is just 10% left of the critically endangered veld type, Cape Flats Sand Fynbos, that only occurs in Cape Town and nowhere else. Like all fynbos – which is fire-prone and fire-dependent – it needs to burn otherwise it will gradually die. The ideal time for a burn is every ten to twelve years. Meadowridge Common contains a small remnant (5,39 hectares) of Cape Flats Sand Fynbos where some 137 different plant species have been recorded. The Common is a Biodiversity Agreement Site, but it is degraded due to a long history of pines and lack of fire – apart from a small wildfire in December 2003. After years of motivating for a fire, the time has finally come and a restoration burn has been planned.

The objective of this planned ecological burn is to stimulate the fynbos seed bank. Because of the long history of pines growing on the common (over 60 years now), and a 16 year time lapse since the last fire, much of the native seed bank may have lost viability as it tends to do after 30 years. So some active restoration of fynbos plants that would have once occurred here will also need to happen.

Where will the fire take place?

Preparation for the fire
On 28 November 2019 the first on-site inspection was conducted, followed by a discussion with City Fire & Rescue Serves and City Air Quality to book their time, acquire the relevant permits and determine the method and best time to burn. The hard work of clearing the site to prepare for a safe and effective burn then has to take place. The fire will take place towards the end of the summer dry season. The Fire Services will be on standby with plenty of water to dampen down the burned veld.

What about the animals?
In fire-driven and fire-dependent ecosystems the survival of plants and animals depends on the veld burning periodically and thus animals that live in fynbos have adapted to survive the veld burning naturally. Many of them only breed in the rainy season, or lay eggs deep underground. Birds are able to fly away, and indeed many birds of prey hunt during a burn. Small animals also use underground burrows, and insects have a knack of moving to safe areas and quickly re-colonising the burned veld. A sweep of the area beforehand will however be conducted.

Meadowridge Common is home to several wild Cape honeybee colonies, and just prior to the clearing, a colony moved into an old stone pine. On consultation with the experts, it was decided to leave the tree standing, and to take care that it will not burn by removing all vegetation from beneath it and wetting it down well before the burn. They will be closely monitored as this will be one of the first opportunities to observe the behaviour of wild bees during a fire.

What kind of fynbos will grow up after the fire?
Several people have expressed concern that the Common will become overgrown with tall protea bushes that may pose a security threat and harbour vagrants, but the site is quite dry and does not support dense, tall vegetation. The City of Cape Town will also continue to maintain the Common and cut back overgrowth as the have done in the past.

When will the fire take place?
During March 2020. It will depend on many factors. No burns take place when the Fire Danger Index shows an orange or red day and no burning takes place on Fridays, weekends or public holidays. The fire team will also have to wait for a light north-westerly wind. The date will be communicated seven days in advance to all affected parties and will be confirmed the day before.

What YOU can do on the day of the burn

After the fire?
The teams will be there to mop up immediately after the fire. The burned area will be closed off for a few days and everyone is asked to stay out and keep dogs out during this time until all danger is over. 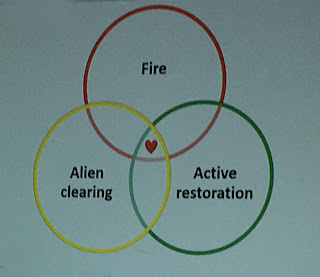 As you see in the diagram above, the process of restoration requires co-ordinated planning and management in order to achieve a meaningful result. After the fire, the process of active restoration will be overseen by several experts, and Kamogelo Solly Modimola will be studying the process for his MSc on restoration ecology through the University of Cape Town with help from Victoria Wilman of the Millennium Seed Bank at SANBI. It is hoped that many dormant species will be stimulated to germinate, including bulbs like Moraea lugubris (shown below) which used to flower on the Common but havent been seen for many years. (Photo courtesy of Fiona Watson, Botanical Officer for the Friends of Meadowridge Common.)

But because the Common's fynbos is degraded, it will also need a bit of help to recover. Seeds have been collected and stored for sowing in late autumn after the fire. Likewise, cuttings were also taken and have been propagated and will be planted back during winter. Key species are Diastella proteoides, Serruria glomerata, Leucadendron salignum, Cliffortia polygonifolia, C. falcata and Salvia chamelaeagnea.

Recovery is expected to be fast, as is usually the case with fynbos, and everyone is looking forward to seeing what will come up on our precious little remnant of Cape Flats Sand Fynbos. Watch this space!