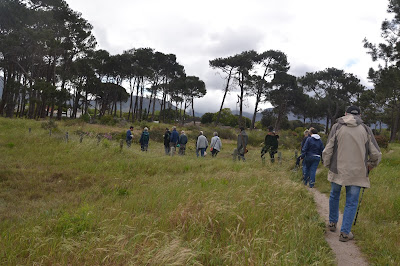 The AGM of the Friends of Meadowridge Common was held on Monday 26 February 2018 in the Meadowridge Common Library.
The Chairman, Roger Graham welcomed members and guests and gave an overview of the year - including news of the new fence enclosing the sports fields and thus cutting off access to the Common and the dramatic decrease in the 80 year old pine trees eleven of which succumbed to the drought and fell down. This has necessitated the preventative felling of several others with the trucks and workers causing some damage to the Common's plants. The Friends have laid woodchip paths in the exposed, sandy areas and we hope that the drought will soon break. Fiona Watson, the Botanical Officer, is very concerned about the state of the Common as the number of plants has decreased dramatically in the last few years.
Other noteworthy happenings during the year included the incorporation of two new storyboards on the Common, one on the Garden Cities development scheme of which Meadowridge is one, and the other on William Purcell. The successful and enjoyable Spring Walk had been held on a September afternoon, a change from the usual morning walk, led by botanist Stuart Hall who is about to receive his PhD. Congratulations Stuart. The Friends also held a winter cake sale which gave a little boost to the finances.
Longstanding Committee member, Gordon Evans, has stepped down from the Committee and a round of applause followed the announcement that it was his 90th birthday.
Fiona Watson, the Botanical Officer, presented a very interesting slideshow on Survivors of the Drought, (see next post) and after the usual presentation and adoption of the finances of the Society by Neville Postings, Roger handed the floor to our guest speaker, Alex Lansdowne. (Click here for a summary of the talk).
Alex Lansdowne was born and raised in Cape Town and his relationship with plants started at an early age. He grew up in the southern suburbs, vegetable gardening with his grandfather - who grew enough fresh produce to feed the family every day. That evolved into an appreciation for wild plants with the encouragement of environmental educator Wendy Hitchcock (of Meadowridge) whilst in school. Alex studied Public Policy at the University of Cape Town. After a short career in politics and marketing he grew frustrated with working inside and started his business as a Restoration Horticulture Conservationist. He then spent 2 years part time with Geert Sprangers, restoration horticulturist at The City of Cape Town Biodiversity Management branch.
Alex now consults independently to landowners on plant conservation projects, with a particular focus on restoration and habitat rehabilitation. He has a particular passion for threatened habitat restoration and species conservation plans. One of his flagship projects is working with the City of Cape Town and the Friends of Rondebosch Common on the Rondebosch Common Restoration Project & the introduction of the beautiful Peacock Moraea (Moraea aristata).