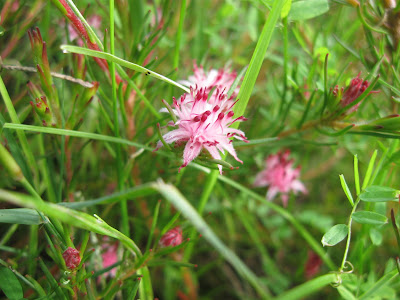 Probably the Common's most important species, this rare and endangered member of the Protea family is the Flat's Silkypuff, Diastella proteoides.
It was once abundant on the Cape Flats, but most of its southern populations have been destroyed and small remnant populations remain - one on our Common! (Click here for the some history of its discovery.) The plant carries a status of 'Vulnerable' in the Red Data book and is likely to be upgraded to Endangered as its northern habitats (it occurs on sandy flats as far north as Mamre) are developed.
The Flats Silkypuff flowers erratically throughout the year, but mainly from July to February and our bush is starting to flower now. Find it near the storyboards on the Common.
The plants do not produce nectar - pollination is by beetles and flies that visit the flowers to feed on pollen. The round white seed is produced two months after flowering. Each flowerhead may produce a single seed, which is bigger than the entire flowerhead. These seeds are collected by ants, which bury them in their nests. Here they are safe from fire and rodents. Germination only occurs after fire. (Info from the Protea Atlas Webpage) 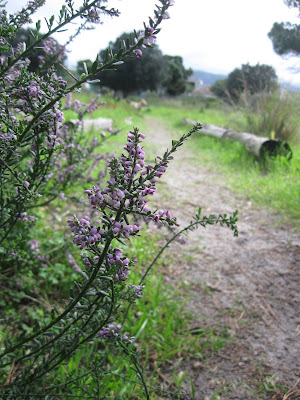 Tortoise Berry, Nylandtia spinosa, belongs to the milkwort family (Polygalaceae) and starts flowering in June. By the end of the month it will be covered in purple flowers. A good plant to grow in your sandy garden! It is named after Pierre Nylandt, a Seventeenth Century Dutch botanist. The species name is derived from the Latin, spinosa, meaning spiny.