How much wood would a woodchip chip? 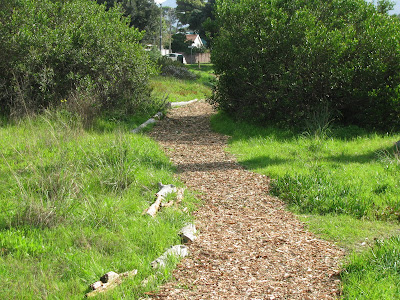 The question in the minds of four of the Friends who arrived to spread a pile of woodchip over one of the main paths of the Common was how far the chip would go. "It does not look such a big pile to me," said Gordon, "probably cover half the path." His being a retired civil engineer who knows a thing or two about roads, we deferred to his judgement and so began the haul.

What none of us bargained for, however, was a magical pile. Not only was it magically fresh and clean but it was also possessed of the property of not diminishing as we reduced. As we returned with the large tarpaulin we were using to load and drag the chips upon, the pile stood as tall as ever, following the law of undiminishing returns. This was proven by the fact that the half way point to which we had dragged the first load and then worked down from now had to be exceeded and we set our sights further up - eventually covering all but 20m of a 100m path. But as we looked back down the track, our last load down, what did we see? A beautiful river of green, fresh chip now lay where a sandy one had once been.

This could not have happened without Nic of Afford-a-Fell. Having contacted him after Louise Kinrade of the Friends of Kirstenhof Greenbelt had given me his name, he simply said: "Sure, I've got woodchip - how much do you want and when?" The next thing it was delivered, no charge, and with another question attached: "When can I deliver the next one?" With friends like this we could go far. Thanks, Nic and those who helped bring the path into shape.